Day 1 | The Glocal Camp from a cliff

The scales of the fish gave off a silvery colour with the reflection of the sun. When fishermen spread their catch on the beach, the neighborhood glowed. From there it takes its name: La Hoya de la Plata, one of the most picturesque fishing districts of the island of Gran Canaria. Its streets are called Estrella de Mar, Cangrejo, Boquerón or Salmón, and some of its neighbors still remember that a tidal wave hit the coastal houses back in 1953. Since then, years and years of democracy passed and successive government came and went. But walls that are falling off and unfulfilled promises about policies for the restoration and recovery of the neighborhood remained. On the first day of this edition of the Glocal Camp Canarias 2018 we got to know about the peripheries.

Yeray is one of the 11-year-old inhabitants of La Hoya de la Plata and has already sent the mayor a postcard with his big, crooked handwriting: “Take down the walls and put them up good”. “The municipal budget never reaches the periphery,” writes another neighbor. “Come and see,” proposes one other. “Our walls are falling apart and until a misfortune happens, you will not take action.” Three hundred postcards were sent to the town hall with the demands of the residents of La Hoya de la Plata. The people in charge of distributing the stamps were from the PSJM artistic team, formed by two artists, Cynthia Viera and Pablo San José, who decided to use their art to make politics when, in an attempt to make an artistic intervention in their streets, they found that there were hardly any walls left in good condition to put the brush to.

“We wanted to teach children to claim what is common, to claim what is theirs,” says Pablo as he shows the exhibition they have organized in one of the rooms of the Literary Cabinet of Las Palmas, in the heart of Vegueta, Cairasco. “It was very important for us to focus on a problem from the periphery to a somewhat elitist enclave,” Pablo continues. Just 500 metres from the exhibition of the La Hoya de la Plata, a huge cigar smoke blurs the majestic entrance of the impressive building. 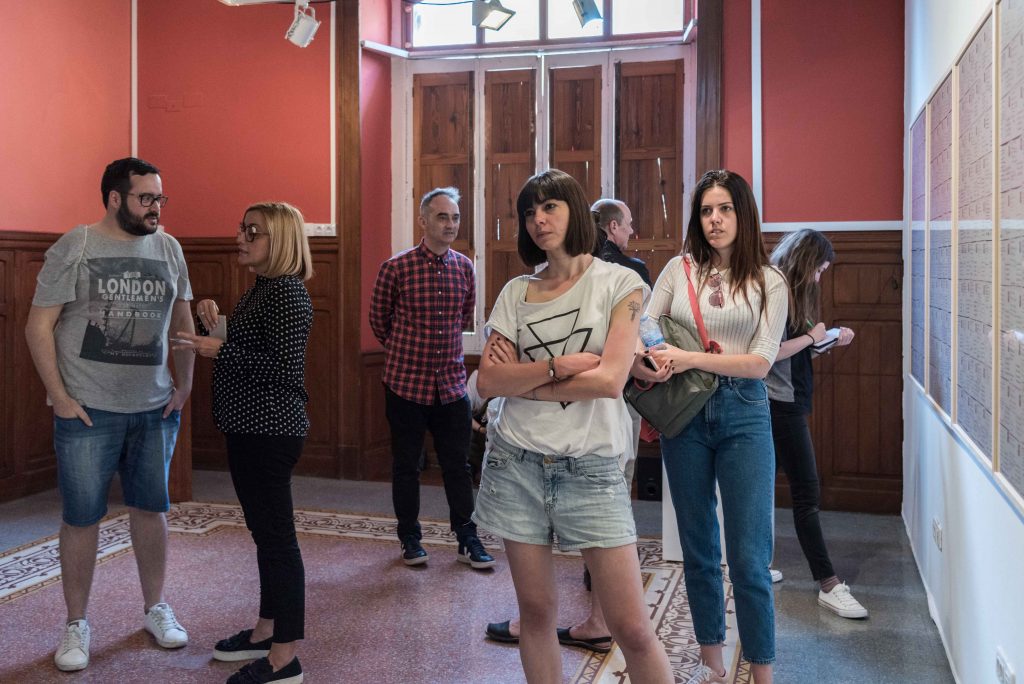 Cynthia and Pablo have invented a participatory art process. Not only have they activated the neighborhood association, which has grown from ten members to over a hundred people in the assemblies in just two months, but also obtained the commitment of the town planning councillor to finance the project that will come out of this deliberative process. The project will be coordinated by the neighbors themselves. Both artists, closely related to the neighborhood, have launched a counter-advertising campaign under the slogan ‘Hoya de la Plata: The best views of Las Palmas‘. Under that headline, two photographs: that of a beautiful sunset with a colorful sky, and that of a half-ruined wall that urgently needs to be restored. These two and a few other photos contrasting each other are brought together and turned into postcards that portray the two faces of a neighborhood where the city ends. 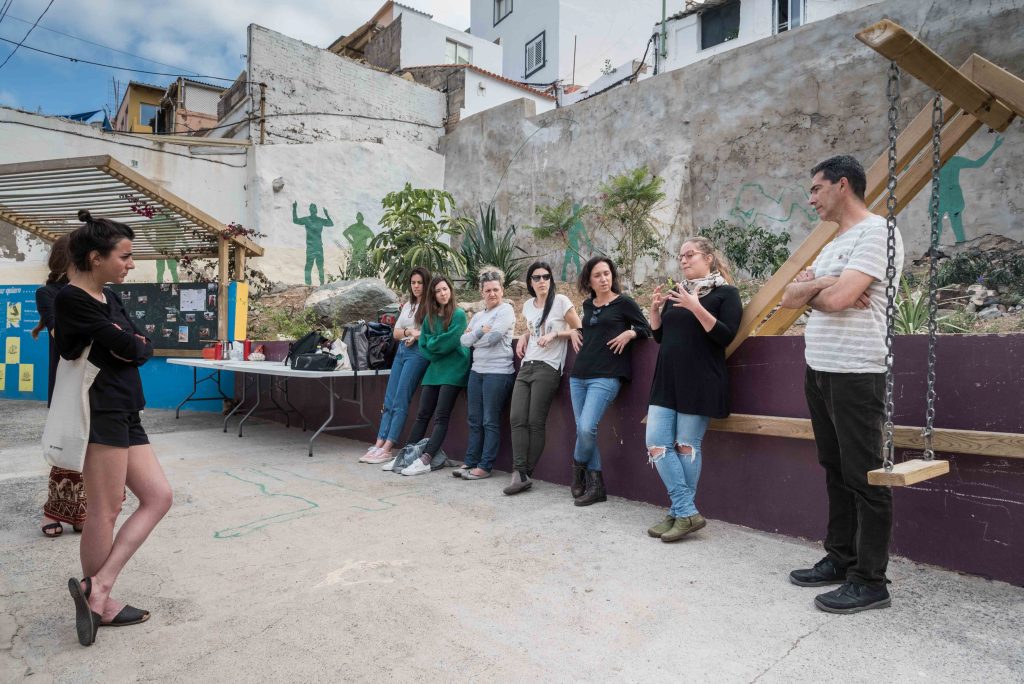 In this first visit we focused on the differentiation generated by the institutions, sometimes unconsciously, out of sheer oblivion, ignorance or laziness, between the first and second class neighborhoods; those that border the centre and the commercial areas, and those which hardly any municipal resources are spent or newspaper pages spared. On the slope of one of the cliffs of Las Palmas lies El Risco de San Nicolas, resembling favelas of Rio de Janeiro or communities and popular neighborhoods in the hills of Chile. The bus leaves you at the foot of the neighborhood, in the heart of the city, close to the cathedral and the tapas bars of Vegueta.

The residents of the El Risco de San Nicolás go down to shop in a market in the lower part of the town, although the growing competition from the huge Mercadona, set up a few years ago on a nearby plot (which was originally used to house sports facilities) is destroying all the small shops that dotted this neighborhood of a thousand steps and coloured fences. Tamara, a member of the MICROmacro Collective and neighbor of the next cliff, San Antonio, explains that, curiously, the home delivery of Mercadona does not go up the cliff slope. 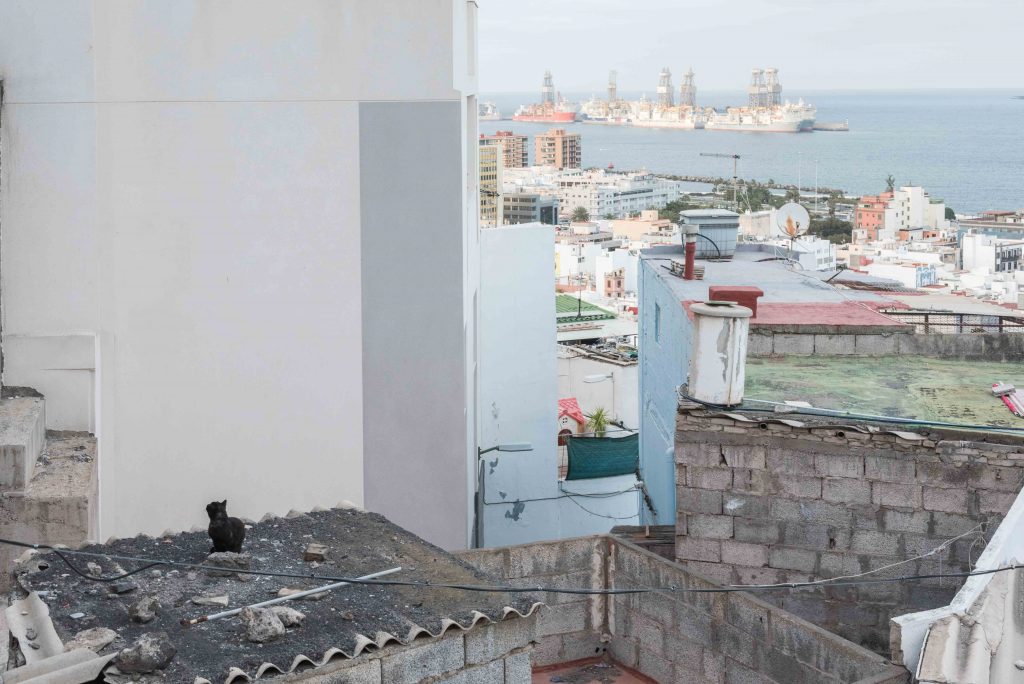 The recovery of impoverished neighborhoods usually begins with a phase of devaluation of the land for the speculation game: buying cheap, selling expensive. The neighbors come out to welcome us with coffee and snacks in a square full of flowers and paintings that they themselves have planted and created. “This lot used to be a dump, and look at it now,” says one, as she opens a brass box of gingerbread cookies she has prepared this morning. “The construction companies have already started buying houses here at a very low price”, explains Tana, another one of the neighbors who has just arrived with a coffee maker in her hand. “It seems that they only reinforce the services of the neighborhood when they prepare it for the colonisation process“. If there will be progress it will be  silent, except for those who have lived there all their lives.

The story is not new, it has already happened in other neighborhoods of so many cities. The outreaches of gentrification do not make the beach or the mountain, the island or the peninsula ugly. “If they take care of the neighborhood, they at the same time take care of the city. Everything good they do here has an impact on the whole. And the other way around”. The smell of coffee invades the small square on the cliff while at the same time sun goes down and the evening breeze starts to show up. “We have to convince the public, because if we are convinced, politicians cannot refuse.” Tana and the rest of the neighbors say goodbye. We climb up thousands of stairs and reach the lively space next to a mural, produced during a workshop for the children during the meeting of Arquitecturas Colectivas last summer with the slogan Culture in Struggle. From above you can see a perfect view of a city of contrasts. The cathedral, Triana Street, the oil tankers, the cliffs. The children run through alleyways and colorful houses, through piles of junk, terraces, barred windows and some shacks. As we walk, the sensation of seeing something real, alive, daily, gives a different feeling than the false photos of plastic postcards that are for deceiving tourists. Probably they don’t know they’re missing some of the best views on the island. 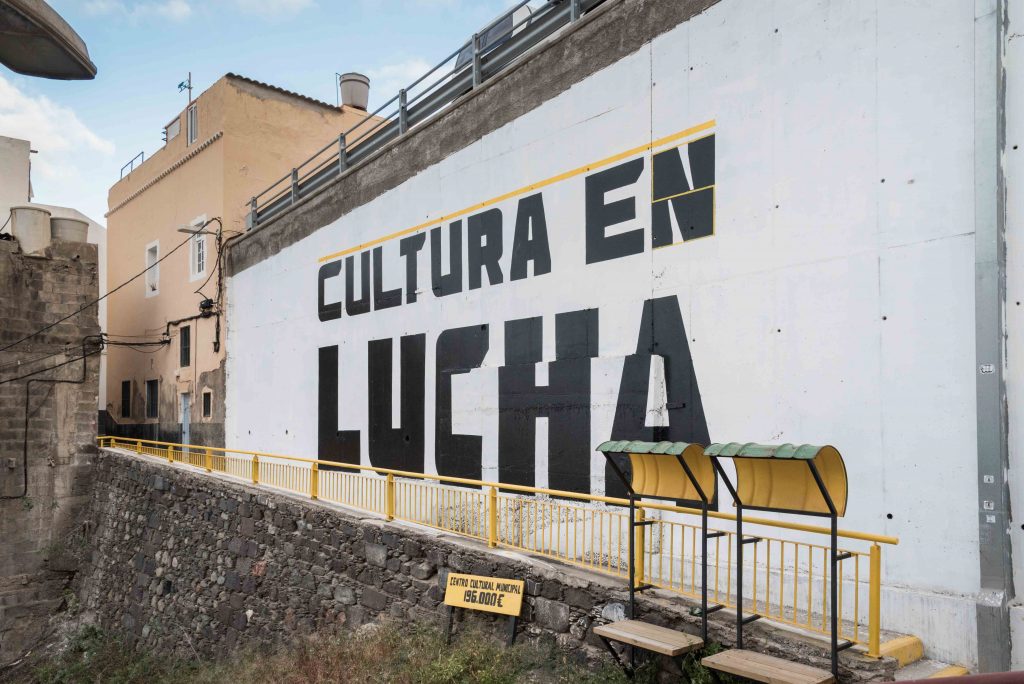